The impact of Covid-19 on aircraft leasing

Aviation has always been a cyclical sector, with periods of growth generally being punctured by downturns driven by an exogenous unexpected factor. Despite its cyclical nature, air travel has generally grown at a two-time multiple of global GDP, with the growth rate over the longer term averaging 4.5%.

The impact of Covid-19 on aviation. Prior to the pandemic, the last two significant downturns were triggered by the global financial crash and before that the tragedy of 9/11. In both instances, there was a deterioration in the number of people flying which persisted for a period, but which was ultimately followed by a return to long term growth rates. 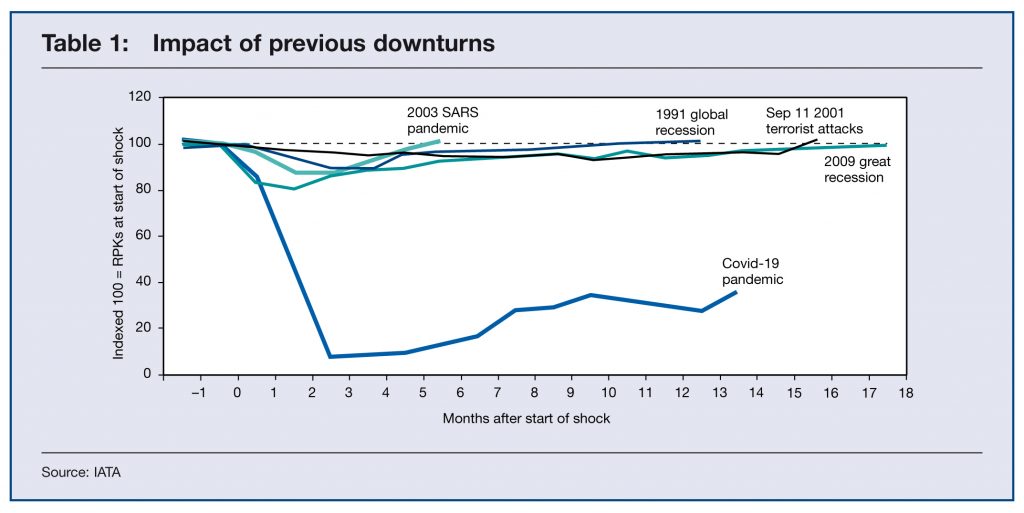 Coming into 2020, the sector was in an unprecedented period, having enjoyed a ten-year super-cycle of growth. There was a widespread belief within the industry that the cycle had peaked and that there were material headwinds facing the sector, but also a general belief that any regression would be measured, barring an unforeseen black swan event. Little did we know the size of the incoming swan.

The pandemic has clearly delivered the largest exogenous shock the sector has ever faced. The financial and performance metrics are startling. 2020 resulted in the worst ever global airline financial performance.

However, despite these stark numbers, 2020 resulted in fewer airline failures and formal restructurings than expected. The primary driver of this has been the remarkable levels of government support, which has now topped US$200bn and come in the form of loans, guarantees, wage subsidies, tax deferrals and equity injections.

Green shoots of recovery. While it remains the case that there is more pain to come for airlines, there is a belief that the recovery has commenced. Among the factors driving the recovery is the significant pent-up demand and clear evidence that people will travel once it is permissible to do so. This is evident from the fact that the Chinese and US domestic markets are now operating at near pre-pandemic levels.

The recovery is somewhat slower in the rest of the world, but the EU vaccine passport is helping European carriers and there has been a significant rebound in that market through the summer of 2021. On the other hand, the slow vaccine rollout in other parts of the globe, particularly in Asia, will continue to cause challenges for airlines well into next year.

There also remains a longer-term question over what will happen to the lucrative business travel market and the potential adverse impact that our new ‘Zoom culture’ could drive. Though one would be brave to predict that businesses will not revert in a meaningful way to meeting current and potential customers in person, once the pandemic is truly behind us.

Total passenger numbers are expected to increase to 3.4 billion in 2022 from 2.3 billion in 2021, but this will still remain below 4.5 billion recorded in 2019. The current International Air Transport Association (IATA) predictions range from a global recovery to 2019 travel levels occurring around 2024 to 2025. 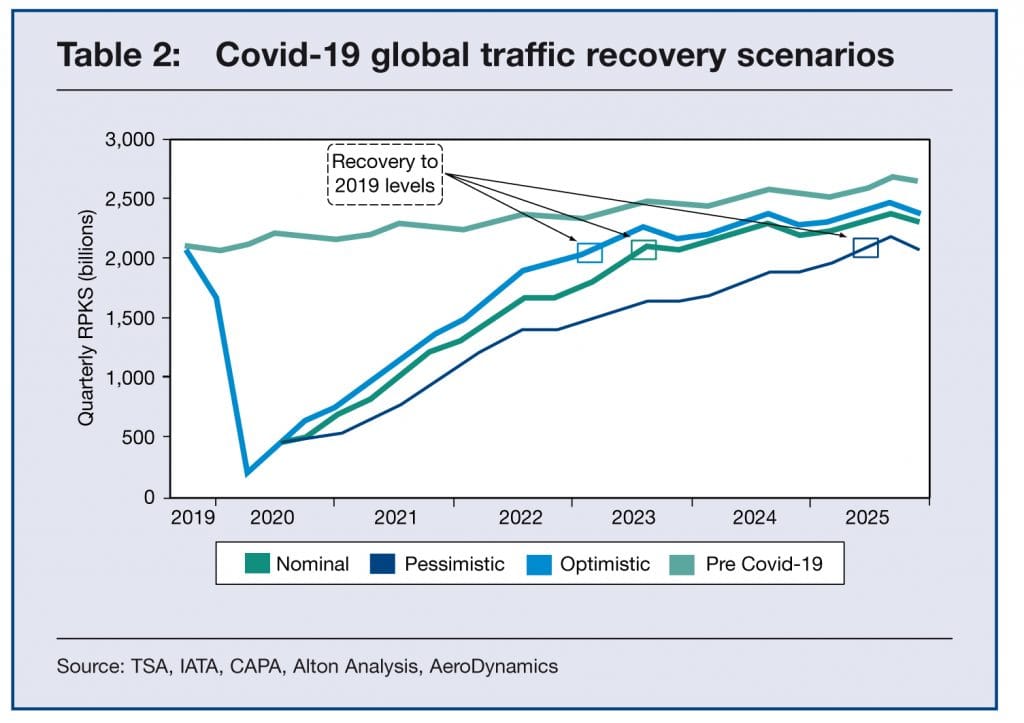 The resilience of aircraft leasing. So, what does this mean for the world of aviation finance and more specifically, the vast and growing industry that is aircraft leasing?

Aircraft lessors felt the impact of the crisis from the outset as they dealt with widespread deferral requests from their airline customers. As the challenging environment prevailed, these deferrals in some cases have morphed into more complicated lease restructurings.

In past crises, when faced with airlines in financial difficulty lessors had the option of taking back their aircraft and seeking to place it with a new airline customer. However, the pandemic created an environment where enforcing on one’s security (either as a lessor or a banker) was a zero-sum game. With no market for repossessed planes, lenders and lessors have been flexible creditors, if at all possible. Better to have your asset with a distressed customer than none at all.

The significant government support provided to airlines, together with the strong balance sheets lessors enjoyed coming into the crisis have provided a buffer to the leasing sector from the carnage that has engulfed most airlines.

Despite the dreadful market conditions, there has not been material distress within the sector. While there have been some participants forced into more formal restructurings, most of the larger lessors have managed to source and maintain liquidity. This has allowed them to manage the substantial impairments they have suffered on their asset base (though entrants who had significant widebody portfolios have suffered more in this regard).

Having weathered what they hope has been the worst of the storm, aircraft lessors are now seeking to position themselves to benefit from the opportunities that the recovery will present.

As noted earlier, airline balance sheets have been decimated by the pandemic. The government supports and additional debts that have been taken on will mean that most airlines will be severely capital constrained for the foreseeable future. Accordingly, the flexibility that leasing can offer airlines will likely prove even more attractive.

The general view of lessors is that the crisis has served to strengthen the relationships between lessors and their airline customers. Lessors’ reasonable and cooperative approach to the cash flow challenges facing airlines led to significantly less airline failures than one would have expected, given the prevailing market conditions.

Indeed, since the outset of the pandemic, we have seen airlines enter into billions of dollars’ worth of sale-and-leaseback transactions with lessors. Some of these transactions were airlines seeking liquidity by selling their existing owned aircraft to lessors and leasing them back from the lessor.

More frequently, lessors were stepping in to fulfil orders that airlines had placed with Boeing or Airbus and entered into a lease of that new aircraft with that same airline. This sale-and-leaseback market has continued to prosper over the course of 2021.

The leasing market has grown substantially in the last 20 years, where we have gone from 25% of all commercial aircraft being owned by lessors in 2000, to that number increasing to just under 50% in 2020. There is a real possibility that the pandemic may further accelerate this longer-term shift.

Lessors funded 55% of new Airbus deliveries in 2020 and there is a belief in some circles that the percentage of leased aircraft could climb towards the 60% mark over the next few years.

So how will lessors finance all this activity? The most likely answer over the near term is in the capital markets. Investment grade lessors have shown a remarkable ability to raise unsecured debt at reasonable rates, with over US$10bn in bond raises in the first half of 2021 at rates which were lower than those achieved pre-Covid. 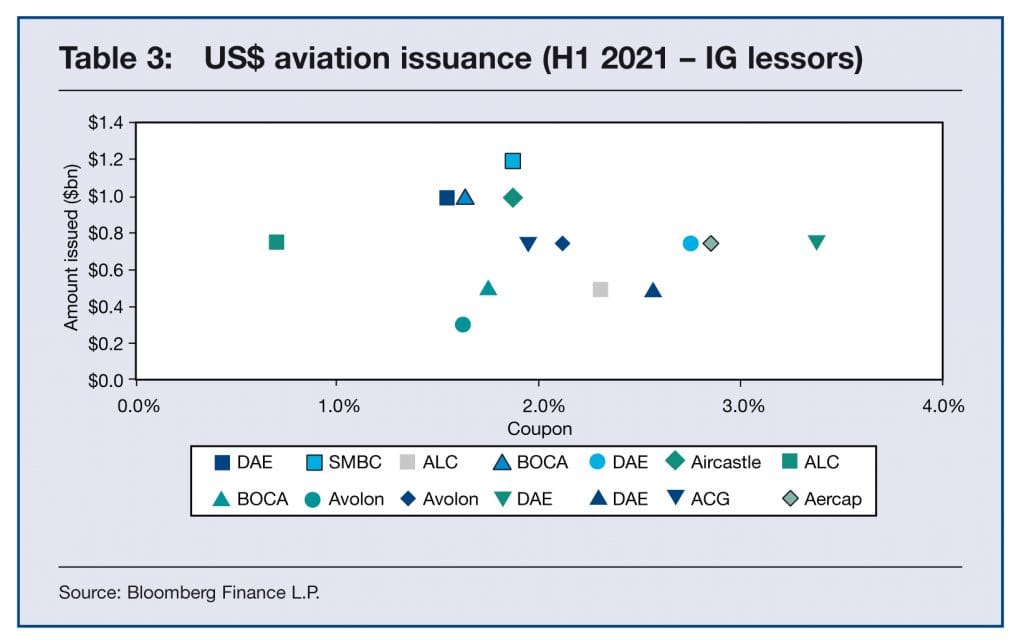 While this is reflective of the macro environment, it also highlights how aircraft leasing continues to become more mainstream and that there is significant market confidence in the business model.

The greatest example of this was the ability of AerCap, the largest aircraft lessor in the world, to secure US$24bn in back-stop funding for its remarkable proposed acquisition of GECAS, the world’s second largest aircraft leasing company. AerCap expect to close this transaction in Q4 of 2021 and have announced that they expect the majority of this funding to ultimately come from the unsecured debt market.

The maturity and popularity of the leasing space is further supported by the additional equity that has been committed to the sector over the last 18 months and there remains an expectation that investors, particularly those in the private equity space, will continue to be attracted to the sector.

The aviation asset-backed securitisation (ABS) market has also seen a material rebound in 2021. This market had become a key pillar of aviation finance and it funded US$10bn of aircraft purchases in 2019, attracting new investors to the space via the tradeable E-Note structure.

When the ABS market effectively shut to aviation in March 2020 there were mixed views as to when it would reopen, with some pessimists expecting it could take years rather than months. However, we have already seen US$4bn of aircraft funding being secured by lessors though this channel in the first half of 2021, with an expectation that more is to follow in the latter stages of 2021.

So, while the aviation market remains in a fractured and challenging place, there is optimism that the recovery has properly commenced, and that aircraft leasing is well positioned to continue to grow and prosper as an industry.

Ireland’s place at the centre of aviation finance. Ireland has long been the epicentre for aircraft leasing, with over 60% of the world’s leased aircraft being owned or managed out of Ireland.

Most of the largest aircraft leasing companies are headquartered in Ireland, including the likes of AerCap, GECAS, Avolon and SMBC) and all of the major lessors have operations and aircraft owned in Ireland.

The key drivers behind Ireland’s success in the sector relate to both the general business environment and the tax regime in the country. The primary factor for the continued success is a deep pool of local expertise that has developed in Ireland since the 1970s. This includes both highly experienced leasing groups in all facets of the business – C-level, marketing, finance, technical, legal, commercial – and also a highly developed professional services infrastructure, which has grown here in recent decades.

Supporting this expertise is a tax system which has three key factors for lessors:

In closing. 2020 was the most challenging year the aviation sector has ever faced but there is real evidence that the recovery has commenced. When the pandemic is truly behind us, the sector will continue to face other challenges, including how it addresses climate change concerns, but it is clear that there is a desire for people to return to the skies, as soon as they are not restricted from doing so.

From an aircraft leasing perspective, the resilience in the face of the wider market challenges has been extremely impressive. Lessors have managed this crisis better than anyone could have predicted, and they are well placed to prosper as the recovery continues. As the global centre for aircraft leasing, that is a huge positive for Ireland and its wider economy.